Oil &Gas
Since many years SimTec’s specialists have been participating in Oil&Gas projects. Our engineers are well estimated in this industry sector and they have broad experience coming from involvement in projects of the biggest size.

In 2005 SimTec’s engineers were part of a big international team that was modernizing control system of three oil and gas platforms. The task was to replace about 150 PLCs of S5-155U type (TELEPERM M system) with about 100 new PLCs S7-400 (system PCS7 v6.1). New HMI system was based on 6 redundant PCS7 servers, 24 operator stations and large screen displays.
SimTec’s engineers were responsible for PLC/HMI programming followed by internal and factory acceptance tests. IATs/FATs were realized with utilization of SIMBA package tool which allows Profibus network and process objects simulation.

The highest quality demands had to be fulfilled - a requirement from the customer was to complete the changeover on a running platform, without stopping the production.

According to Siemens recourses, that time it was the biggest implementation of PCS7 system in the world. 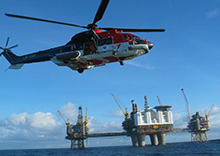 Simtec’s engineers have necessary trainings/certificates allowing them participation in offshore commissioning works. Due to this our activities are not limited only to onshore programming and testing, but we are also fully involved in commissioning and startup of installations.